Goals for the New Year 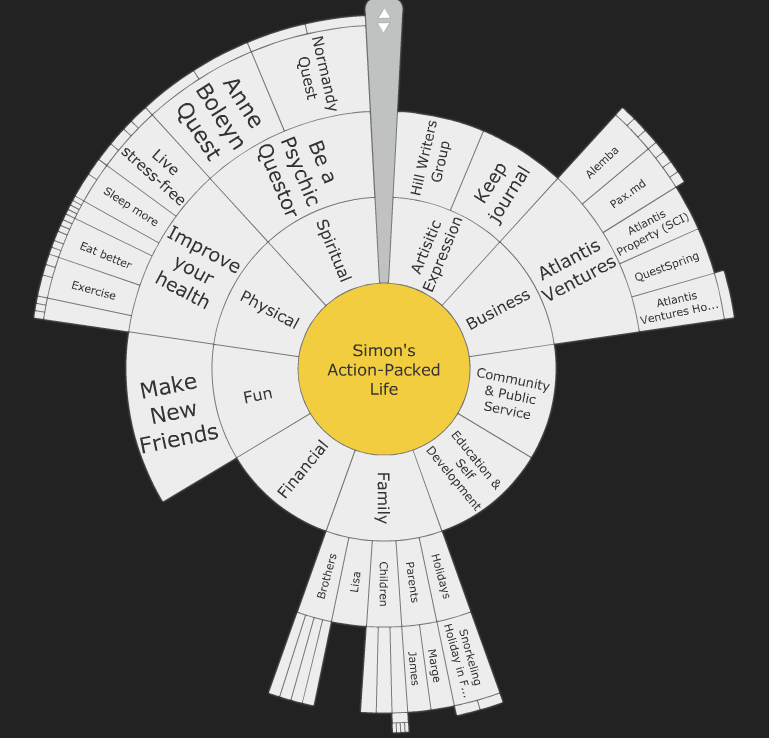 I am a great believer in setting goals and New Year's celebrations help to focus the mind on reviewing previous goals and setting new ones for the year ahead (see, New Year's Eve *is* good for something).  However, I am a bit of a technology geek and I always try to get software to help me do a job although this frequently turns into an excuse to research software rather than doing what I'm supposed to be doing (qv my previous posts on Journal Software – currently I'm using something called Day One – http://dayoneapp.com/  – which still doesn't come close to the late, lamented Omea – http://www.jetbrains.com/omea/ –  but which at least gives me an easy to use way of tracking my dreams, notes and research ideas in a nice, easily searched environment).

With regards Goal Software, I have had a similar struggle.  Over the years, I have trialled an amazing number of software packages spanning the spectrum of Goal-oriented to Task Management-focused.  On my machine alone are Things, OmniFocus, Wunderlist, Outlook (Tasks), Mind Mapping software – not to mention Business Task Management apps such as Ms Project and also online services for which I have accounts such as Intervals and Basecamp.  And these are just the ones I haven't deleted.  Add to that all the personal organisation courses that I have attended (Priority Management and Getting Things Done to name but two), not to mention innumerable books, ebooks, feeds and newsletters and you'll see that I am soaked in organisational good oil.

it would seem strange then that this morning at 05:00 I woke up, my head awhirl with things that I needed to capture for the year ahead.  Accepting that I wouldn't get back to sleep, I went downstairs to get them out of my head and onto "paper".  But for all the organisational training and software I still haven't found the "Holy Grail" of Goal software.  In fact, as I run my own software company, I have developed some fairly detailed requirements to write my own software which would support my personal approach to dream realisation (more on this in the future).  Anyway this morning, I started to dump my thoughts into relevant project containers in Things but instinctively felt that they were disappearing into a black hole and would never be reviewed. (My use of Things has declined since I tweaked my usage of Outlook to move the emails that i'd dealt with into a subfolder – and not vice versa. Tip of the hat to Lee Chalmers for that one.)

Ever one to procrastinate, I decided to have a quick search on the internet to see if anything had appeared on the market since I last looked. My quick search consumed at least an hour but at the end of it I had discovered Goalscape which is the closest I have found to the ultimate Goal Management package.  Being totally honest, their concentric circle layout (I'm sure this has a proper technical name but Goalscape – the company – confusingly refer to it as a goalscape) is cleverer than anything I had in mind and this combined with the ability to quickly move up and down the levels creates a brilliantly visual way of viewing your goals and sub-goals.  Very broadly you start with a circle in the middle (e.g. "My Life") and you add sub-goals which appear as layers around the middle. Like the more familiar tree structure, you then add as many sub-nodes at whatever level you want. Here is my starter template showing the areas I want to slot the goals into: 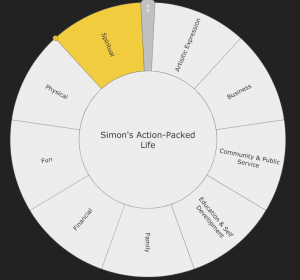 Building out the various sub-goals and sub-sub-goals (you get the idea!) I very quickly and easily get something like this: 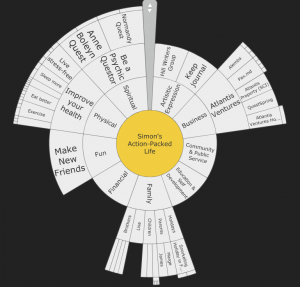 In a similar but slightly different view you can double-click on any piece of the diagram and it instantly creates a new view with the piece you clicked on as the current centre of the circle.  So here is me clicking on the "Improve Your  Health" section (which is one of the free templates you can download from the Goalscape website and which can be copied and pasted in at any level of another goalscape). 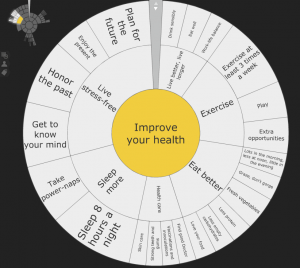 Note how the overall goalscape is displayed in the top-left corner as a thumbnail.

Further cleverness occurs by adding an importance which will resize the concentric rings (by default if you have two sub-goals each will take up 50% of the available layer but by using the importance you can adjust this) and by adding completion percentages a graded fill will again give an immediate visual cue for overall completeness.  You also have options for formatting colours although I haven't yet tried this.  Document attachements to goals are also fully supported as are exports to various tools like Excel and Project.

Sub-goals can be given start and end times and this effectively turns them into Tasks (I won't go into the philosophical debate around whether this is actually desirable or valid).  A quick filter (accessible from the main screen) allows you to highlight tasks/goals matching date criteria.  Goals/tasks can be assigned to people and people are another of the key filters.

One of the drawbacks of the current version is that you cannot see all the tasks listed in due date order but the developers claim that they are looking at this for a future version.  It isn't a massive problem, though, because if you are hooking it into their online service you can sync it with your iPhone and the iPhone app does display the tasks in exactly this way.  The developers are hesitant about providing this in the main app because they don't want it to be seen as a simple Task Management application and as they point out you can export to Project if you want a nice Gantt chart but it does seem to me that this is ultimately functionality that you would want in the main package.

It is not cheap either.  The desktop package costs a one-off £75 which is certainly in keeping with other offerings in the same space but then the online "Connect" piece costs another £75 per year.  Given that much of the functionality could be achieved by storing your .gsp files on iCloud this seems a bit cheeky. As against that the iPhone version is free.

Overall, though, this looks like a wonderful piece of software.  I found it very intuitive (genuinely intuitive; I watched a short tutorial and other than that haven't consulted any source of help documentation since using it) and I built out my New Year's resolution incredibly quickly and watched the goalscape take shape before my eyes.  The emphasis is on the visual structure and this works really well for my brain but I guess this may be different for others. After an hour I had downloaded everything I wanted, had spotted some obvious gaps for future consideration and, most importantly, had soothed my fevered brain allowing me to go back to bed and back to sleep.

IT consultant by day, quester by night. Your navigator through the realms of the techno and the freaky.